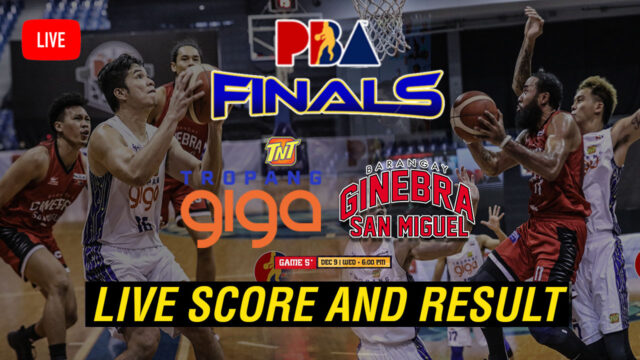 Here are the live scores, updates, and results of the 2020 PBA Philippine Cup between the Barangay Ginebra San Miguel Gin Kings and the TNT Tropang Giga, scheduled on December 9, 2020, at 6:00 PM.

Heading into the pivotal Game 5 of their race-to-four titular series against Barangay Ginebra, the Tropang Giga will be playing without their star players Bobby Ray Parks Jr. and Jayson Castro as the two were ruled out due to injuries.

At the early stages of the PBA bubble finale, Parks sustained a strained left calf, which forced the high-scoring TNT player to sit on the sidelines as his squad battled it out to win the PBA All-Filipino title and snatch it from the league-leading Gin Kings, which is now just a win away from doing just that.

Meanwhile, Castro went out with a knee injury due to bone spurs in the team’s 98-88 Game 4 defeat.

Confident that the embattled Tropang Giga could rise to the occasion amidst adversities, TNT head coach Bong Ravena is now looking on his bench to possibly find someone who could step up and eventually lead TNT’s last-ditch attempt to possibly extend the series to a Game 6 and hopefully stretch their championship bout to a Game 7 winner-take-all this Sunday.

On the other hand, the 3-1 Gin Kings would just need to win tonight’s game to bag the title and give yet another feather to Barangay Ginebra head coach Tim Cone’s cap.

Despite their relatively insurmountable lead, Cone reiterated that their mindset would be playing the Tropang Giga at their full strength.

“TNT is going to come outline wounded tigers. It’s an organization with a lot of pride, so closing out this series will be incredibly difficult. We know that. We’ll need to earn it, they certainly won’t give us anything,” said Cone.

“I don’t know what Jayson’s status is and Bobby Ray’s, but they are down a couple of really, really key players. That will be like us losing Scottie (Thompson) and Stanley (Pringle), something like that. And how difficult it would be to win for us without Scottie and Stanley. That’s how I look at it,” stressed Cone in a post-game interview.

Register now and be a #PBAFinals Game 5 virtual fan!

Brgy. Ginebra leaned on LA Tenorio in the end game to beat the TNT Tropang Giga in Game 4 of the PBA Finals, 98-88, and move a win away from claiming the 2020 Philippine Cup title.

My microwave is too small to fit the microwave popcorn bag

Going Beyond Amazon: A New Model for Authors, Retailers, and Publishers