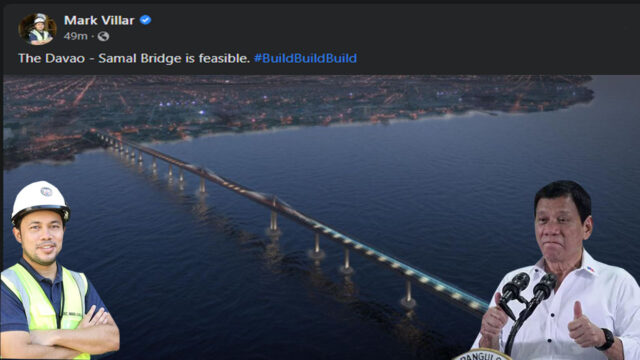 The construction of the 3.98-kilometer Davao City-Island Garden City of Samal (IGaCoS) bridge will begin first quarter of next year, an official of the Department of Public Works and Highways (DPWH) said.

The bridge project has a five-year timeline, starting from the implementation of the design and build contract in the first quarter of 2021, which means the target completion for the multi-billion-peso bridge project will be beyond the term of President Duterte.

Let’s rewind the narratives years back.

The first viable feasibility study was done by the Japan International Cooperation Agency  (JICA). There were inaudible objections among stakeholders especially from resort operators in the Samal Island side but weighing the impact on them in terms of losing vital real estate assets as against the increase of domestic and foreign tourists that would patronize their resorts they acquiesced to the plan as conceptualized by JICA. The estimate then was that about 25,000 vehicles will cross the bridge daily and not a few of these are tourists. The FS then considered an area where the huge columns of the bridge skirts away from rich marine resources. The bridge was supposed to land in an abandoned shipyard in Samal which is also the shortest distance from Davao City. Not much objection was aired in Davao City’s side.

What was intriguing later was a new twist in the plan. Along the way, when the National Economic Development Authority gave a green light for the P23.04-billion project to be part of the “Build, Build, Build” program (listed as No. 42 in DPWH list) the Asian Development Bank came into the picture and conducted detailed engineering design and projected that by December 2020 the Department of Public Works and Highways may start with the bidding process tapping China ODA (Official Development Assistance). It looks like ADB or DPWH hired a Hong Kong-based designer called ARUP which in turn did not take into consideration the environmental impact of the project by virtually rejecting the more rational idea of landing the bridge adjacent to the old shipyard and land being offered for free by a stakeholder.

I can only make a guess but I surmise that the stakeholders on the Samal side were not consulted by ADB when they conducted a detailed engineering design. This time they were aghast to learn that the four-lane span will land right smack into their resorts and veered away from the old shipyard where JICA had proposed in their FS. Among those seriously affected by the ADB plan are the Rodriguez family which owns Paradise Resort and another family who owns Costa Marina Beach Resort whose property the bridge will run through.  Rodriguez,  who pioneered the resort development of Samal in the early 1960s offered an adjacent property to the government for free but DPWH is not accepting the donation. This intransigence can prompt Rodriguez and the rest of the resort operators to invoke the Writ of Kalikasan and who knows when can this be resolved. Already Atty. Ramon Edison Batacan of the Batacan, Montejo & Vicencio law office had made overtures of possible legal remedies not only on behalf of the affected stakeholders but of the environment.

In a way, Davao City Mayor Inday Sara Duterte-Carpio is correct in saying that groundbreaking ceremonies are not important. What is important is seeing the Davao-Samal Bridge project come to fruition. “To see is to believe”, she was quoted as saying.

That is a strong message to Sec. Mark Villar and ADB  to better bridge the gap they had with the stakeholders in Samal. You cannot proceed with the construction of the bridge if you assert your authority over the rest like a raging bull in a China shop. Presently we are seeing a bridge too far.