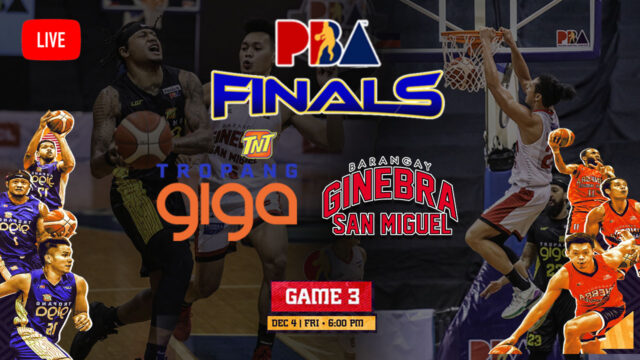 Here are the live scores, updates, and results of the 2020 PBA Philippine Cup between the Barangay Ginebra San Miguel Gin Kings and the TNT Tropang Giga, scheduled on December 4, 2020, at 6:00 PM.

Despite leading by 2-0 in the early stages of their best-of-seven titular series against the TNT Tropang Giga, the league-leading Barangay Ginebra San Miguel Gin Kings will not take Game 3 lightly even though their finale foe’s ace Bobby Ray Parks Jr. is out due to a sudden strained calf muscle.

“We never know, this might be my last time to play in an all-Filipino championship. Whatever it takes again, whatever it takes for us to win every game, to get the win, we’ll take it,” Tenorio reiterated.

The last time out, Thompson played a pivotal role in the dying seconds of Game 2, as he shoots a dagger three-pointer that gave Barangay Ginebra the lead, 87-85, and eventually the win, mirroring his semis-winning trey against the Meralco Bolts.

A win by the Tim Cone-mentored Gin Kings later tonight would mean they’re just a win away from claiming their first All-Filipino championship in 13 years. This would place the Bong Ravena-coached TNT in jeopardy as they would need to win four games in a row to claim the title.

Barangay Ginebra overcame a 15-point deficit in the third to eke out a 92-90 win over TNT, taking a commanding 2-0 lead in the PBAFinals.