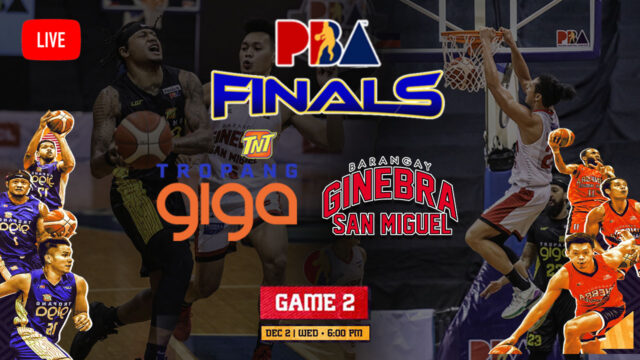 Here are the live scores, updates, and results of the 2020 PBA Philippine Cup between the Barangay Ginebra San Miguel Gin Kings and the TNT Tropang Giga, scheduled on December 2, 2020, at 6:00 PM.

The first-seeded Gin Kings outlasted the third-seeded Tropang Giga in an overtime grind, pulling off a 100-94 win in the gut-wrenching, nerve-wracking opener of their best-of-seven titular series at the Smart 5G-powered AUF Sports Center.

They did not disappoint as all rose to the occasion, beating TNT for the crucial head start in the conference’s finals. Collectively, the above-mentioned veterans scored 90-points.

The Gin Kings go for a follow-up in Game Two Wednesday.

“Laban lang talaga,” said Aguilar, who played a pivotal role the last time out, scoring 25 points on top of 16 rebounds.

In a separate interview, Game 1 leading scorer Aguilar said: “LA (Tenorio) was telling us let’s treat all our remaining games as do-or-die, no-tomorrow; our last chance to win this all-Filipino crown.”

“We never know, this might be my last time to play in an all-Filipino championship. Whatever it takes again, whatever it takes for us to win every game, to get the win, we’ll take it,” said Tenorio.

The Bong Ravena-head coach TNT had a chance to win the game in regulation, but Jayson Castro, who tallied 12 points, missed a runner in the closing seconds. This eventually led to their vanquish in the overtime.

On the losing end, Bobby Parks Jr. and Roger Pogoy led the losing team with 20 and 19 points apiece.

Now, with a strained calf muscle, Parks, who has been Tropang Giga’s lead gun in the bubble, is highly doubtful for Game 2.

“Ray is highly doubtful to play in Game Two. We are hoping he could play on Friday,” said the TNT team after getting the result of Parks’ MRI test at the nearby Medical City.

Parks is averaging 22.5 points, 8.1 rebounds, 3.1 assists and 1.3 steals per game for a league-leading 38.3 statistical points average through the semis.

The Kings is gunning for a 2-0 lead later tonight, while Tropang Giga will try to tie the series at 1-1.