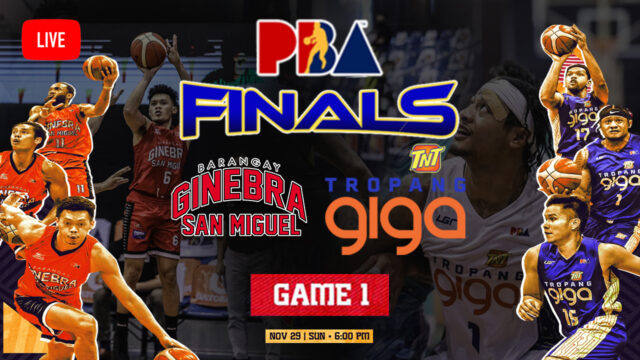 A roller-coaster PBA season finally comes to a close as Barangay Ginebra and TNT vie for the Philippine Cup title in a best-of-seven finals series starting on Sunday, November 29.

There is no rest for the weary with Ginebra and TNT immediately plunging to action just two days after surviving their respective best-of-five semifinals affairs.

Ginebra needed a game-winning three-pointer from Scottie Thompson to escape Meralco and advance to the finals, with a chance to end its 13-year All-Filipino title drought.

TNT, meanwhile, staved off elimination against Phoenix before it closed their do-or-die duel with aplomb as it reached the Philippine Cup finals for the first time in 7 seasons.

Scottie Thompson’s game-winning triple to send Barangay Ginebra into the 2020 PBA Philippine Cup Finals was reminiscent of a historic shot that etched Justin Brownlee into the franchise’s storied lore.

Four years after Brownlee buried the trey in Game 6 of the 2016 Governors’ Cup to end an eight-year title drought, Thompson came up with his own signature moment by putting the Gin Kings in a position to vie for an All-Filipino crown that has eluded the franchise for 13 years now.

“Of course, the first championship with the Justin shot, that’s the crème de la crème. But this one is right there close to it,” he said after Ginebra edged out Meralco 83-80 in Game 5 of their semifinals matchup.

Against TNT on Sunday, Nov. 29, Ginebra can finally begin its quest to win its first Philippine Cup title since 2007.

Here is the Live Updates also Play by Play: