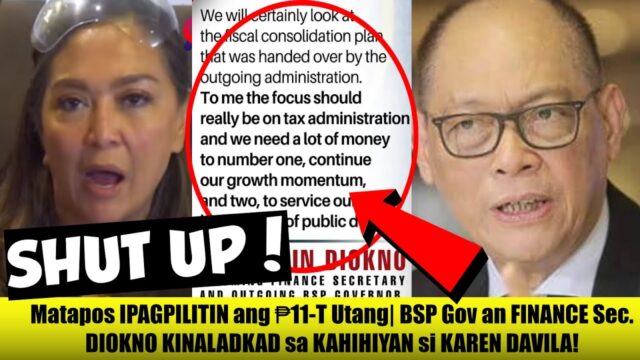 Karen Davila face after Ben Diokno’s reply to her

“I will make it simple, “Walang pera ang gobyerno! So you will be facing a lot of challenges as the new Finance Secretary of the incoming Marcos administration. So what is the plan?” question

Ben Diokno’s reply in essence is the following:

Prior to the Duterte administration, we were heavily indebted, and had a hard time arguing with the IMF. Before, our foreign reserves will last for only 2-months at least. But with the Duterte admin, we have at least 9-months worth of import reserves.

We do not have a problem with paying our debts which is mostly domestic than foreign, and we are a net contributor to the IMF;

The Duterte admin has the best tax structure than the previous admin that can help the Marcos leadership.

The Duterte administration is the golden years of infrastructure for our country due to the Build, Build, Build program where the government spent from 5 to 6% of the GDP, and gave us better airports, and better seaports that boost our international trading. It created jobs, high quality jobs, and expands the capacity to gain economic growth.

This is unlike the previous administrations where the Philippines was branded as the poorest in infrastructure in Asia because they only spent less than 2% for infrastructure.

Now we have the Public Service Act that is a 90-year program, allowing 100% foreign investments for big ticket projects like telcos, airports, subways and other similar projects

We have a standing 80 plus programs from the current administration that will be continued by the Marcos leadership.

We have a goal of achieving a 70% digitalization of all transactions, and the like. We have plans for the economic future of the country, and we will be ready.

Here is the full video: