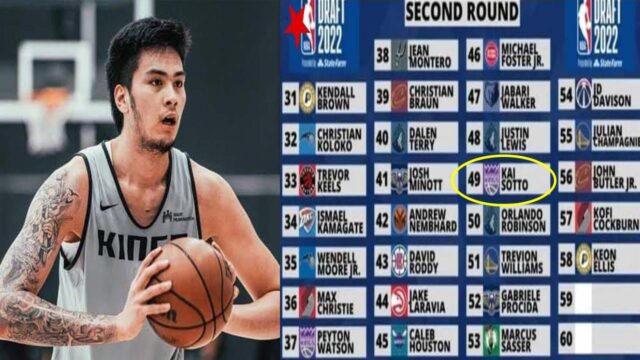 Kai Sotto’s journey to the NBA will reach its climax on Thursday, June 23 (Friday, June 24 PH time) with the 2022 Draft unfolding at the Barclay Center in Brooklyn, New York.

Carrying the hopes of a nation seeking its first-ever homegrown NBA player, the pressure will be on for the 7-foot-2, 20-year-old center.

However, thousands of miles away from New York, someone is admittedly even more anxious. Reggie Varilla, a former coach of Kai Sotto is also eagerly awaiting the results of the 2022 NBA Draft.

In an exclusive interview with PTV Sports, Varilla shared how he first met Sotto at a basketball clinic in Ateneo.

The Ateneo coach was tending the 15-year-old age group when he first noticed Sotto’s talents.

Much to his surprise, the then 5-foot-10 Sotto was only 11 and was just playing with older participants.

Ateneo immediately reached out to Kai’s father, former PBA player Ervin Sotto, to formally recruit the promising dribbler, but since Kai was too young to travel back and forth from Las Piñas to Ateneo, the plan was stalled for a couple of years.

Sotto fulfilled his promise and eventually committed to Ateneo High School where he once again met Varilla.

Aside from Sotto’s towering figure that understandably became a huge part of his image, Varilla also detailed how the NBA hopefuls’ game was already quite advanced at a young age.

Instead of manning the paint like a center, Varilla moved Sotto to the four-spot, adopting the playing style of Los Angeles Lakers forward Anthony Davis.

From there, Sotto worked non-stop on his shooting and passing to achieve his coach’s plan.

Sotto left Ateneo in 2019. Since then, he has traveled around the globe to further hone his skills. He went to Atlanta, Georgia, and became a part of The Skill Factory (TSF) before joining NBA G League Ignite. Before declaring for the NBA draft, Sotto played a full season for the National Basketball League’s Adelaide 36ers where he posted 7.5 points and 4.4 rebounds on 50% field goal shooting including a 38% clip from rainbow territory.

Despite the distance, Sotto and Varilla still maintained their communication.

“Last time we had a real conversation was during the Ateneo-UP game. Kasi the next day daw he will be flying out na. Sabi ko ‘medyo matagal pa ‘yon ah [NBA Draft],’ Sabi n’ya ‘I have to get ready, build my confidence and train sa States. Every now and then messages na lang kami ng mga lokohan.”

Since he became a huge part of Sotto’s journey, Varilla couldn’t help but also feel the anxiety and excitement over the upcoming draft.

Knowing that every Filipino will have their eye on Sotto at the draft, Varilla left a heartfelt message for his one-time ward.

“’Wag mo masyado isipin ‘yong pressure na dala-dala mo ‘yong buong bansa. The best way for you to represent our country well is for you to be you. Focus on your dreams. There will always be people na mamba-bash but there will always be people also that will support you. Focus on the things that are within your control,” he said. “You’ve done the work, you put in the effort, the time, regardless of what happens on Friday, we’re proud of you.”