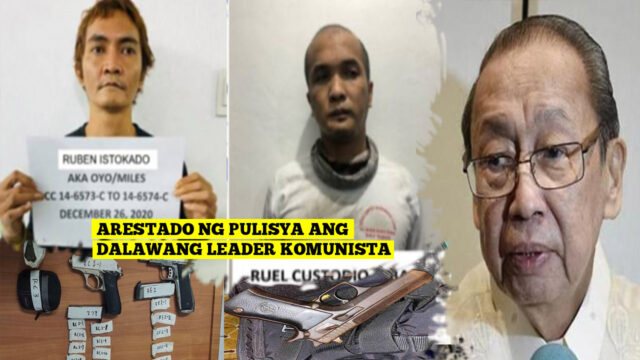 Police records identified Custodio as finance officer of the Southern Tagalog Regional Party Committee responsible for the collection of “revolutionary taxes” in the province of Quezon.

Custodio is also respondent in two separate criminal cases filed in 2019 for kidnapping and illegal possession of firearms, with warrants issued for his arrest.

Istokado, on the other hand, is a political instructor responsible for propaganda work for Komiteng Probinsya 1 of the Bicol Regional Party Committee and also respondent in two separate criminal cases for double murder and multiple murder filed in September 2014.

Both suspects are now undergoing booking procedure and investigation in Lucena City pending their turnover to the court.

The CPP-NPA is listed as a terrorist organization by the United States, the European Union, the United Kingdom, Australia, Canada, New Zealand, and the Philippines. (PNA)