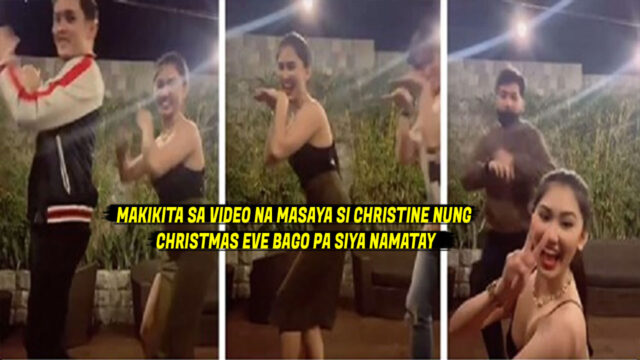 It was on Christmas Eve, 2020 and the caption on the video was “Christmas Dinner.”

A short video clip that was uploaded on TikTok by Rom Galido showed Christine Dacera with four of her friends.

It was on Christmas Eve, 2020 and the caption on the video was “Christmas Dinner.”

The photo of PAL flight attendant Christine Angelica Dacera which was the one she uploaded last on her Instagram account has gone viral. The caption on the photo of Christine was “Last flight for this one helluva year.” The upload was made before the news of the 23-year-old’s demise broke.

Friends of Christine Dacera gave an interview to ABS-CBN and recounted how good their friend really was. One of her friends, Andrei Barretto, candidly recalled his last conversation with Christine on New Year’s Eve on IG. Andrei said that he replied to her story and that while he told Christine that he was at home, she told him that she booked a room with friends. When Andrei told her, baka “mapano ka dyan,” she replied that it’s negative because her companions were “mas babae pa” than her.

Vincent Talavera Seeing from this scene that she was badly drunk and doesn’t want to rest yet and the guy was just concern for her being. Just an opinion respect

Nosaj Zepol As a parent.. Ive been reminding my daughters to be with us especially New Year and not with somebody else.. Condolence to the bereaved family.. so sad

50 Tips and Insights About Productivity, Happiness, and Life