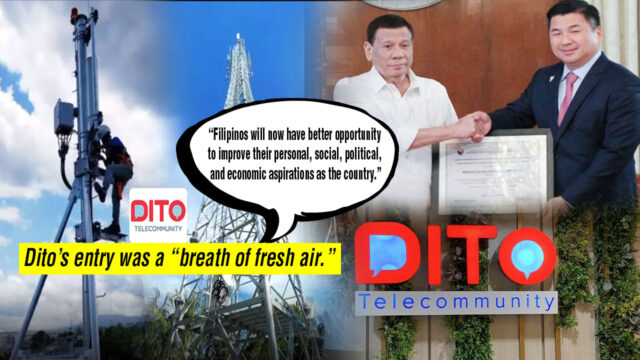 Dito Telecommunity Corp. was able to deliver on its commitments for its first year of operations based on the findings of the technical audit conducted by independent auditor R.G. Manabat and Co., the National Telecommunications Commission (NTC) reported Monday.

The technical audit started on January 7, 2021, after the NTC issued a resolution to extend the audit which was earlier scheduled in July 2020, marking one year after Dito was awarded its Certificate of Public Convenience and Necessity (CPCN) on July 8, 2019.

As part of its commitments, Dito vowed to deliver 37.03% national population coverage within a minimum average broadband speed of 27 megabits per second (Mbps) in its first year of operations, else risk losing its P24-billion performance bond. Other commitments have also been made for the following years.

“Dito’s entry in the market is a welcome development in the telco industry. A healthier competition within the industry fulfills President Duterte’s promise to the Filipino people of better telco service thru cheaper prices and improved internet speed,” the NTC said in its statement.

The Dito consortium is made up of Uy’s Udenna Corporation, Udenna’s subsidiary Chelsea Logistics Holdings Inc., and Chinese state-owned China Telecommunications Corporation. It has scheduled its commercial rollout in March.

“Today, I am glad to announce the entry of a new player that will take on the challenge of competing against the existing players in our country’s telco industry. This new player is the Mindanao Islamic Telephone Co. or Mislatel consortium… ccompanying this bond is a commitment—and I will hold you to that commitment—that it will improve the country’s prevailing Internet speed from 4.5 Mbps to 55 Mbps,” sabi ni Pangulong Duterte.

Duterte said Mislatel or Dito’s entry was a “breath of fresh air.”

“Let us take the entry of this new telco player as a breath of fresh air in our rapidly evolving information age, where no one should be left behind in our pursuit of an inclusive and sustainable progress for all Filipinos,” President Duterte said.

“Expand your businesses, engage in online jobs, avail of online learning and training opportunities, and participate in productive public discussions,” he said.

The 10 Runway Trends You’ll Be Wearing This Year