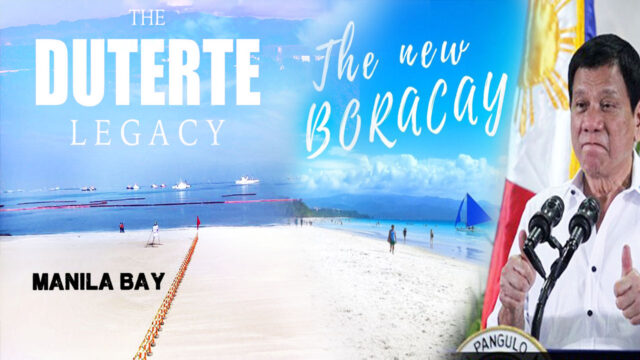 Many plans set out for 2020 were delayed, if not put to end, by the (COVID-19) pand3mic. The Department of Environment and Natural Resources (DENR) was not spared as the global health cris1s had momentarily “disrupted” the agency’s momentum in implementing big-ticket projects, which included the Manila Bay rehabilitation.

“The DENR has been tested a lot this year. Under normal circumstances we do not mind being put to the test. We want to see and to confirm that we can measure up to  challenges if not exceed them,” according to DENR Secretary Roy Cimatu.

He cited how the Department was praised highly for the rehabilitation of Boracay Island’s damaged environment in the past two years.

“That achievement raised expectations and we were rewarded with a much bigger challenge—the rehabilitation of the heavily polluted Manila Bay,” Cimatu said, citing the Manila Bay rehabilitation project dubbed “Battle for Manila Bay,” which was launched in January 2019.

“Then just a few months after we celebrated our first year of the Battle for Manila Bay, the COVID-19 pandemic spread in our country and disrupted our momentum,” the DENR chief pointed out.

“That was not normal but we learned to live with this and accepted that this is now our new normal. We had to adapt by shifting to alternative work arrangements. All things considered, especially the obstructions like the COVID-19 pandemic and the floods, landslides, and other natural disasters that the country has endured this year, we can say that we did well even if we were prevented from doing our best,” he said.

Despite the limited movements and restrictions due to COVID-19, the DENR reported that it was still able to accomplish much to rehabilitate Manila Bay.

It has also completed the construction of a circumferential sewage interceptor and communal septic tank specifically for the BASECO area in Manila.

The installation of three more solar-powered STPs in Metro Manila is in the pipeline, after unveiling the first one along Roxas Boulevard in Manila in July.

DENR this year also spearheaded a mangrove planting at the BASECO lagoon, which it said was only the start of habitat restoration in that part of Manila Bay.

Massive mangrove planting activities will also be held along the shoreline of Las Piñas-Parañaque Critical Habitat and Ecotourism Area, and Parola, at the side of the Pasig River by 2021.

But not everyone appreciated the efforts, as the DENR saw mounted criticisms on its beach nourishment project, a component of the Manila Bay rehabilitation that involves the overlaying of crushed dolomite to create a white sand beach in a portion of the Manila Bay coastline.

The Department was firm in saying it was not bothered at all by what critics say of the government’s rehabilitation efforts, particularly the beach nourishment project.

It said it had been “transparent” about the undertaking. Of the P389 million allotted for the entire Manila Bay rehabilitation project, only six percent or P28 million was spent for the dolomite overlay.

Manila Bay is only in its second phase of rehabilitation. The third phase, according to Cimatu, is the hardest—changing the attitude and behavior of the people towards the environment.

This phase, if it becomes successful, would sustain all the efforts that have been done to bring Manila Bay back to its former pristine condition.